LiveBarn will be broadcasting the SUPERSERIES AAA BOSTON BREAKOUT Live & On Demand from the following tournament venues:

Follow along with the action Live & On Demand via any web-enabled device, from any of the LiveBarn tournament venues. Share highlights via social media & email.  Download and save tournament games.

Submit your highlights for a chance to be featured in our Tournament Highlight video!

The Boston Breakout is the premier early season event hosting 200 teams at rinks throughout New England. The Boston Breakout was created to provide teams the opportunity to play five very competitive games early in the season and prepare for league play. This is a five-game round-robin event. SuperSeries staff will match teams into groups of six teams, based on the following criteria:

The midget division for the Boston Breakout will take place at Quinnipiac University and will consist of a four-game round robin.

Eligible Teams - All teams are eligible, as the teams will be broken into evenly matched groups.

Schedule - All teams must be prepared to play at 8 am on Friday and all play is scheduled to end by 4 pm on Sunday. Age groups/divisions will play at centrally located rinks. 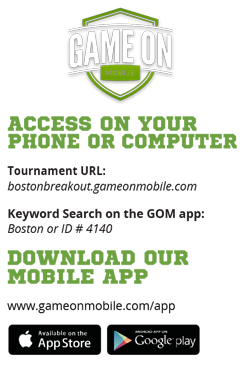